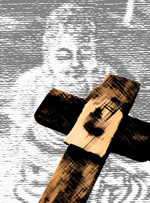 Thomas Merton, famous Catholic monk belonging to the cloistered Trappist tradition (Order of Cistercians of the strict observance), once said that he wanted, “to become as good a Buddhist as I can.”

Before he converted to Catholicism at age twenty-three, he read about Christian mysticism. He read works such as Augustine’s “Confessions” and Thomas a Kempis’ “The Imitation of Christ,” and other books that subconsciously embedded within him a taste of directly experiencing God through the process of negation.

After ordaining as a monk, Merton was interested only in Catholicism for many years and nothing else, but little by little, as he became older, and after reading such authors as St. John of the Cross and Meister Eckhart, he began to become increasingly interested in mysticism, or a direct experience of God.

Merton then began to understand the universal nature of mysticism, and that Buddhism, especially, addressed mysticism more clearly than Christianity did regarding how to understand it, and more importantly provided a non-religious method to make a fundamental change in one’s life. This attracted him to Zen, and eventually he co-authored “Zen and the Birds of Appetite” with D. T. Suzuki which uniquely spelled out the similarities of Buddhism and Christianity at deeper, mystical levels. Merton began to explore universal spiritual truth within the structure of his Catholic faith.

For some, Buddhism has become an organized religion just like any other religion, with beliefs, ceremonies and rituals. However, the original Buddhism, as taught by the Buddha, was all about personal transformation, and not about religion at all.

This is what makes fundamental Buddhism compatible with other religions; that there are no requirements of belief involved. It is completely experiential, and deals with life and the problems of life directly. It addresses the reality that we all experience stress, and answers all the questions surrounding this stress. Buddhism also lays out a logical plan to end this stress forever.

So Buddhism could be called a philosophy of how to live one’s life day to day. It explains why just trying to be good doesn’t work without an understanding of good and bad, and of our fundamental selves. We scrunch up our determination to change, but it never quite works out as we meet our same old self time and again when the going gets rough.

Buddhism could also be called a psychology because it delves into areas of the mind at deeper levels than modern psychology that only dabbles in the surface irregularities, never getting to the root.

Buddhism could also be called a religion because it explains the experience after death, but in a neutral way that doesn’t involve a creator God, or the necessity of any worship or belief. Everything becomes self evident while practicing Buddhism, and Buddhist practice itself is non- denominational as well, regarding the non-religious convictions it presents. The Buddha once said, “Believe nothing unless you can prove it true for yourself.”

And a great scientist, Einstein, once said, “The religion of the future will be a cosmic religion. It should transcend a personal God and avoid dogmas and theology. Covering both natural and spiritual, it should be based on a religious sense arising from the experience of all things, natural and spiritual and a meaningful unity. Buddhism answers this description. If there is any religion that would cope with modern scientific needs, it would be Buddhism.”

Therefore, according to Einstein and the Buddha, one should not fear that Buddhism competes with one’s beliefs, because it doesn’t. Gandhi once said a very wise thing; that one could find the deeper roots of one’s own religion by looking to other religions, and then returning to one’s own faith with new eyes.

About the Author:
E. Raymond Rock of Fort Myers, Florida is cofounder and principal teacher at the Southwest Florida Insight Center, http://www.SouthwestFloridaInsightCenter.com His twenty-nine years of meditation experience has taken him across four continents, including two stopovers in Thailand where he practiced in the remote northeast forests as an ordained Theravada Buddhist monk. His book, A Year to Enlightenment (Career Press/New Page Books) is now available at major bookstores and online retailers. Visit http://www.AYearToEnlightenment.com