My cat died today. His name was Kiko.

As I was leaving for work, I noticed Kiko was sleeping on the driveway blocking my exit. I stopped the car and walked over to him yelling “kiko”.  I knew something was wrong when he did not respond and as I inched closer I could see he had died. 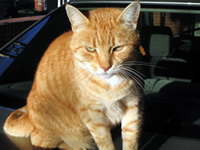 Four hours earlier, Kiko was alive and purring waiting for his morning meal which he never seemed to finish.  What was once part of my life was gone forever with no warning or goodbyes.

I feel a deep sense of sadness because Kiko was a great pet and companion- friendly, affectionate and smart.

Ten years ago I walked into a Petsmart and adopted this little orange tabby from the humane society.  I was told Kiko’s mother had been hit by a car and he was raised by an old lady who could no longer care for him. This did not surprise me since he was so friendly and loved to be held. I think I had one of the few cats who thought he was a dog and would fetch the little toy mice I would throw.  Kiko would reluctantly drop the mouse at my feet for another round before getting bored with the whole thing.

Did I take him for granted? Yes. Over the years, he almost became invisible in my daily rush to and from work. My only interactions seemed to occur when I would feed him or check on his water.

Which brings me to my point.

Now is all we really have.