Two week ago, I decided I needed A vacation where I could shop, rest, and just  enjoy my life for at least three nights.  I booked a South Beach vacation package with my partner and we ended up staying at an art deco hotel called “The Century” on Ocean Boulevard (Where all the action is supposed to be). 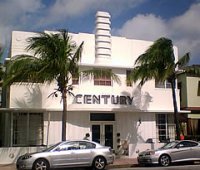 Our arrival was smooth and we took a taxi from the airport to  the Century hotel. The remodeled hotel was a compact slice of the 1930’s Deco genre. The concierge was friendly and our room was small but comfortable. Everything was within walking distance including the beach and there was a Starbucks directly across the street!

That night we walked down the bustling Ocean drive and I amazed at the number of Bentley’s, Mercedes’, and Ferrari’s in one place. We were frequently accosted by cheesy sales people trying to get us to eat at their restaurant..not cool.

We stopped for a drink at Diesel’s Pelican Hotel. The wait staff were flat and my pricey dirty martini had too much olive juice. Using City Search we found a Zagat  rated “inexpensive” 24hr Mexican restaurant called Loco Taqueria. The Mexican fast food was terrible and cost us over $30.00.

The next day we headed for the beaches which had gorgeous blue-green water (though not as clear as Destin, FL). 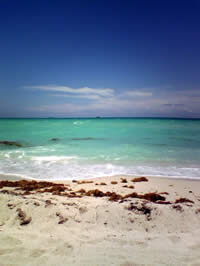 The ocean was warm and we spent the day swimming. My partner had a craving for barbecue(!!) and we actually found a delicious restaurant called Barbecue Beach(!!!). We had some delicious tender ribs with cornbread and greens in South Beach!!.

Later we walked over to Madonna’s hotel (The Delano) designed by Philippe Starck and strolled through the lavish lobby to the pool. Wow.. It was truly a sight to see with Starckly designed interiors.

For lunch the next day,  we stopped at a corner pizza joint called Pizza Rustica and ordered three super large pizza slices which were incredible. Very reminiscent of a good NY Pizza.

We walked over to Lincoln Road where most of the high end stores are located and stopped at a cool men’s clothing store called Base. They had some great music and clothing. I was drawn to their Nooma watches…

My eye caught the sign of a store called the 9th Chakra. I wound up buying Sandalwood Mala beads, and my partner bought some Nag Champa Oil that he likes to wear as an alternative to cologne. 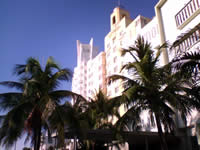 As we were leaving, we stopped at bar called Score (yeah, cheesy name). We decided to have a drink and ordered frozen margaritas which where very strong (for a gay bar).

As we were sitting there in midst of all the loud music and rush of human activity, I found myself enjoying the people watching .

We departed the next day and I was happy-sad as we boarded the plane back to Charlotte. And so it was.