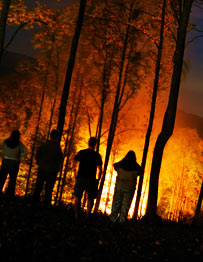 Last weekend I escaped to the Tennessee Mountains with a group of friends. We arrived four hours later, and I was surprised to see a beautiful two story pine cabin. The cabin, which was more like a luxury home, had large glass windows and a wooden spiral staircase with woven twigs for railing.

Firmly planted on the porch was a 6 foot hand carved wooden bear (the kind you see for sale off the highway) that we  affectionately referred to as “Wesley bear” (also the name of the cabin).

As the night wore on, we put on some scary movies like “Descent” and the dated teen classic “Urban Legends”. It was 3AM and I decided to go to sleep.  On my way to the bedroom, I noticed almost everyone was sleeping. The fireplace was glowing softly emitting a little click or pop every now and then.  I jumped into the bed landing with a loud thud.. Damn! hard bed.. and fell into a deep effortless sleep….

Suddenly, I felt someone shaking me. I opened my sleep filled eyes and realized it was my partner.  At first I did not hear a word, then I realized he was saying “the fireplace is on fire!”.  I immediately thought… “yea, that’s what fireplaces are for”.  As I rubbed my eyes again in frustration, It dawned on me what my partner was really saying… “Get up now!! The fireplace is on Fire!!!”

I immediately jumped up and went to the living room and noticed that the fireplace wall looked like a red hot stove element.  I could see a fiery glow within the wall. We tried for several minutes to extinguish the fire but it was too late as the fire was already consuming the pine wood around it.

All 8 of us quickly gathered our belongings and rushed out. Within minutes the entire cabin was consumed with red orange flames. I could hear the large window glass shattering from the heat.  Flames were reaching out of the windows grasping for more oxygen to burn.  It’s hard to explain the sheer power and fear as you watch a wild uncontrolled fire consume everything in sight.

It was a full moon and the molten ashes were wafting into the sky like souls ascending into heaven. Kind of creepy and beautiful at the same time.

There was a brisk wind blowing and the fire just kept getting bigger.  We all frantically dialed 911 on our cell phones. It seemed like hours before the first fire truck arrived.

As the fire truck rounded the corner my first thought was “honey who shrunk the truck”. The truck looked like a mini-me version of a standard fire engine. I could tell it would not have enough water to put this fire out. Finally, a second truck arrived and several hours later the fire was extinguished.

Once the adrenaline rush wore off, it occurred to me that if everyone had been asleep at 4:00 AM, we all would have perished that night… Incinerated in our sleep.

The next day we went to the site of our cabin and all that remained were some charred wood and exposed cinder blocks.  Smoke was still rising from the melted mess below.  Somewhere in the remains, I could see the remnants of the Wesley bear statue -charred but still intact.

It could have been me… us…

Today, I walk with with more appreciation for everything and every one in my life . I am living in the present with ever more conviction.  It’s now or never baby. Do what makes you sing before it’s too late. The time is now.

Here is a video one of my friends shot of the event.