I have always wanted to create music. So I decided to learn how to play the Didgeridoo and the Native American flute. Both instruments are supposed to be somewhat easy to play and allow for a free-form style of music. 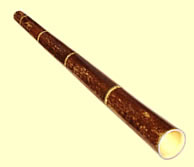 I chose the Didgeridoo because the sound of this Australian instrument is very haunting and strangely beautiful. Apparently, the Didgeridoo is one of the oldest in the world dating back 2,000 or more years. I placed an order for a reasonably priced bamboo Didgeridoo from Laoutback which has a good reputation in the industry. It is supposed to arrive today and I am very excited. I guess I will have to learn circular breathing.

I recently attended a Sunday service at the Center for Positive Living in Charlotte and they incorporated a native American flute in the service. The sound was so beautiful and seemed to resonate with me in every way. Anyway, I ordered a Butch Hall flute from Grand Canyon flutes which should arrive next week.

It is a nice feeling to actually begin the transition from being a passive listener of music to a potential creator.