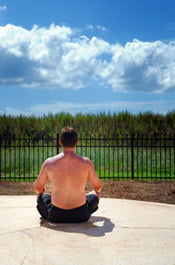 Thinking about an email I received from a friend. After telling me the problems that some people close to us are having, my friend said, “Life is bumpy, isn’t it?”

I replied that there is no reason that life shouldn’t be bumpy. Our suffering is not caused by the fact that life is hard, but by our belief that it should be easy. When we accept life as it is, without comparing it to how we think it ought to be, then there’s no source of suffering.

I have a friend who spent more than ten years in prison. He told me that he was still more free than most of the people he knew outside of prison, because he had decided that he was going to live his life as it was, where it was, while most of his friends on the outside created a prison for themselves by constantly wanting life to be something other than what it is.

This man didn’t like being in prison – he hated it, of course – but he refused to let being incarcerated keep him from being happy. He had to stop attaching to his preferences, his likes and dislikes, and simply be present – and when he was able to do that, he was able to find joy in whatever the day brought.

I no longer suffer.

Acceptance of hardship doesn’t mean not doing anything about it when there is something to be done. Even though my friend accepted that he was in prison, that doesn’t mean that he didn’t accept parole when it became available to him. Accepting life as it is doesn’t mean taking a nihilistic view, a despairing belief that nothing matters; rather, when we pay close attention to what is, we find that everything matters.

Most of the things we’re afraid of happen only in our minds. Most of the people whose lives we envy are no happier than we are – because, no matter how seemingly fortunate the circumstances of a person’s life, that person can still suffer by indulging in preference and comparison. In the same way, no matter how seemingly unfortunate the circumstances of a person’s life (I’m sure no one envies my friend’s ten years in the joint), that person can still find happiness by meeting life on its own terms.

When it rains, let it rain. Yes, life is hard. We’d like it to be easier, but it’s not, so why compare it? What’s certain is that, even though life could always be different, it could never be better. Each moment is as good as it gets. Whatever we have is all we have, and, when we see it clearly, it turns out to be all we need.

Dogo Barry Graham is a Zen Buddhist monk, a social activist and a writer, and the Abbot of The Sitting Frog Zen Sangha.  He has written articles for national magazines, including Harper’s, Flaunt and Parabola and his poetry has been published in magazines and anthologies. He has taught Zen in jails, homeless shelters and community centers, and has witnessed two executions in Florence, Arizona, each time at the invitation of the prisoner, not the state. In Arizona and Tennessee, he has worked to stop police brutality and gang violence. He sees Zen practice and social activism as being inseparable. You can read more at his blog “The Urban Monk” .